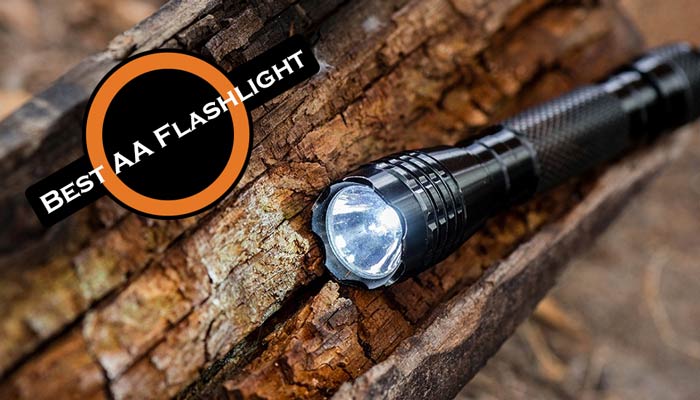 An AA flashlight simply refers to the battery type used in such equipment.

This kind of flashlight that makes use of such battery type is considered the most convenient and widely used due to the availability of the AA batteries. These are the standard-size batteries that offer a lot of advantages over the rechargeable counterparts.

There are still AA flashlights that perform very well, contrary to what other people may say when these lights are compared to CR123a flashlights, although it may not perform at the same level as what the latter could do.

Nonetheless, the best AA flashlight can come in handy and is a good alternative to those large handheld lights, whether it is used for law enforcement, the military, the medical field, handgun owners, and so on.

So, to help you sort out the excellent products on the market, below are the best AA battery flashlight reviews that could come close to the size and strength of other tactical flashlights. 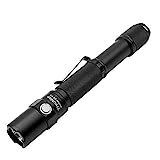 With an average rating of 4.5-Stars is the Thrunite Archer AA LED  from the ThruNite Archer Series. It is the Archer 1A upgrade, giving the torch an updated LED technology – the CREE XP-L V6. From this feature, you will expect the bulb lifespan to last for more than 20 years, despite the daily use of this flashlight.

Moreover, this AA LED flashlight boasts a new reflector light, improving the quality of the beam, not to mention a friendly user interface, which is way much better than its predecessor. You will be delighted with the new two-switch feature, making the flashlight easier and faster to operate. Its tail switch is a forward ‘clicky’ tactical switch while the side switch has been added to this model.

This AA battery flashlight has a tail cap, featuring a U-shaped groove for the accidental activation protection; however, this feature also allows an easier activation at the same time. While this torch weighs at only two ounces, its stainless steel bezel construction also makes it a reliable defense device during emergencies. This model measures 4.3 inches in length and 1 inch in diameter.

Additionally, the Archer 1A V2 offers five modes – the strobe, high, medium, low, and firefly mode. It runs a single AA battery; hence, it is the brightest single AA flashlight, or it can accommodate a Lithium-ion battery as well.

This torch provides the lowest setting of 17 lumens that can last for 22 hours and the highest setting of 180 lumens, lasting for 2 hours. Certainly, this model is among the best options when it comes to Every Day Carry (EDC) torches. 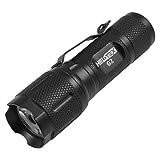 The Helotex G2 flashlight is one of the top-rated torches on the market today. Garnering an average rating of 4.5-Stars, this is considered as the best AA Flashlight EDC by many consumers due to its dual-power capacity. It can run on a single CR123 or AA battery while boasting a CREE XR-E Q4 LED technology that results in an incredible 130 Lumens output.

This torch also offers a tactile click on/off button, located at the rear. After turning it on, you can toggle between low, high, and strobe functions through a quick tap of the power button. It is constructed from anodized 6063-T6 aerospace-grade aluminum while the O-ring seals offer optimum weather resistance capacity.

The new design of the Helotex G2 retains its super-bright light output on the high mode, and offering the flexibility of a real low output setting, which is perfect for close-up functions. Many actual users label this model as the best AA LED flashlight, although it is slightly different is shape when compared to its predecessor. Also, its ‘Low’ setting is dimmer.

Nevertheless, this new version can be attached more securely than the older model. Thus, it is used by people from different walks of life, ranging from EMTs to firefighters, keeping the Helotex G2 flashlight in their pockets for everyday use. 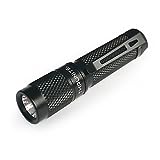 The ThruNite Ti3 is the brightest and the best AA LED torch if you’re in search of a budget flashlight. Garnering a 4.5+ on average rating, this could be the perfect option, considering the Thrunite brand. This model makes use of the most recent LED technology, providing a highly-efficient torch for everyone who needs it.

It is also considered as the best AA LED tactical flashlight by many owners due to its silent operation as compared to ‘clicky’ switch counterparts. This version makes use of an electronic switch, making it as quiet as possible, while featuring a low voltage indication simultaneously. These features allow you to turn it on and off and switch the torch between six modes.

With the ThruNite Ti3 model, Thrunite has created an exclusive ITC technology, which greatly helps in the prevention of damaging the light and overheating. Hence, the ITC technology tends to reduce the current output once the temperature is at 176 degrees Fahrenheit.

Without the battery, the Thrunite ThruNite Ti3 weighs at 0.42 ounces, while Ti3 series light dimension 2.76 inch (length) x 0.55 inch (diameter). The lowest setting equates to 12 lumens and can last for 6.3h hours and the highest setting at 120 lumens.

Additionally, this AA flashlight offers max beam distance 50m as the maximum beam distance. Anyone is fortunate with this torch as the bundle includes 1 holster, 2 spare O-rings, and 1 battery carrier, making it the best AA flashlight under 50.

Sunwayman C22C is the best AA LED torch for many actual users due to its incredible XM-L U2 LED technology, an assurance to last for up to 50,000 hours. The same technology also ensures the light generates 580 lumens output when it’s in Turbo mode, although running the Turbo mode for over three minutes is not advisable.

Instead, switching the mode to High will produce 130 lumens output, which you can run for 1.5 hours in a continuous manner. When it comes to the Variable Output category, the Sunwayman C22C outperforms its rivals. This is mainly attributed to the Magnetic Control System, exclusively used by Sunwayman which results in an Infinite Variable Output switch.

Moreover, the c22c offers a broad-voltage circuit, allowing the torch to work through varieties of batteries, despite the voltage. Hence, this model is compatible with the best batteries for flashlights, including the standard AA or one CR123A battery. This unique feature also makes the C22C the most versatile torches around, making it the perfect EDC torch considering its user-friendly interface at the same time.

Weighing at only 7.2 ounces without the battery. On the lowest setting, Sunwayman C22C produces 1 lumen that will last for 35 hours while the highest setting generates 216 lumens to last for 1.5 hours.

With a compact design, this torch offers a rubber switch for optimum comfort, while its aircraft-grade aluminum construction ensures durability, practicality, and efficiency all at the same time.

READ: Flashlights solutions to help in the dark 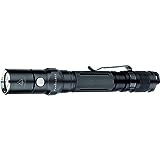 The Fenix LD22 has generated a lot of positive customer reviews, resulting in the 4.6-Star average rating of this product. Among its amazing features include its compact design, but with an upgraded operation feature, plus 300 lumens of output, way much better than its predecessor.

This LD22 is the brightest 2AA flashlight with four brightness levels and SOS, plus Strobe mode that surely meets the lighting demands for searching, hiking, and basically throughout daily use. The Indoor mode equates to the standard flashlight operation, while the revolutionized Tactical mode can turn off the side switch, activating the turbo mode, mid and strobe modes via the tactical tail switch.

This model is certainly an upgrade from the older LD22 released in 2015. This version weighs at only 2.5 ounces without the batteries, while measuring at 6.1 inches in length and 0.8 inches in diameter. For 100 hours, the Fenix LD22 can generate 5 lumens on its lowest setting and can run for 40 minutes at 300 lumens on its highest setting.

The most sought-after features from the brightest AA battery flashlight is delivered by the Fenix LD22, boasting its Cree XP-G2 (R5) LED technology that offers up to 50,000 hours of lifespan. It is powered by two AA batteries, ranging from the standard to the Ni-MH, Alkaline, whichever is readily available.

For optimum practicality and efficiency, the kit includes a lanyard, a holster, and 2 EdisonBright AA Alkaline batteries, plus the unmatched features that offer no less than easy, fast, and convenient operation. Check our Fenix LD22 Review here.

Why is AA Flashlight for You?

There are many reasons behind the creation of the best flashlight that uses AA batteries. An AA flashlight is for you if:

Without a doubt, the most reliable AA LED flashlights are created by renowned and credible manufacturers to provide customers diversity when it comes to flashlights, whether for emergency or regular use. While you’re in search of the best torches on the market, keep in mind the above-mentioned products, considering the features, ratings, and price tags at the same time.

It is also important to understand the differences between the battery types, helping you narrow down the choices as you search for the brightest and the most powerful AA LED flashlight the market has to offer.