How to Choose Tactical Flashlight 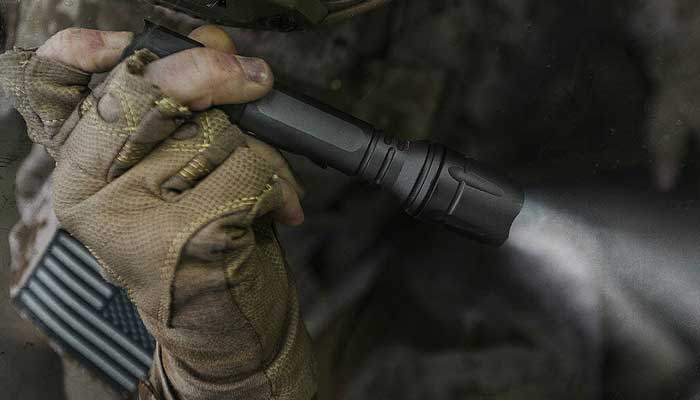 Excluding factors such as cost and brand preference, there are three main factors to consider when buying a tactical flashlight. As you formulate your decision, each of these factors will contribute to your final selection. First, comes the toughest: for what tactical applications will you use the light? To search trucks and vans as a Border Patrol agent or to execute dynamic entries as the entry man on a SWAT team?

Maybe you’re an armed citizen concerned with keeping your home safe if you hear shattering glass in the middle of the night. Second, how much light will you need? Do you anticipate long-range threats or mostly CQB distance encounters? The amount of light is crucial to fulfilling different tactical roles for white light. Finally, how long will you run the light before you can install fresh batteries or put the light down for a recharge?

A flashlight is simply a tool you use to control or alter your environment. And, like any tool, it usually has one specific application for which it excels, depending on its design and construction.

For instance, the SureFire M6 Guardian with its six lithium batteries and retina-searing 500 lumens of blinding white light is an incredible tool for a SWAT operator who needs to blind a bad guy while crashing a crack house, but the size and weight of the M6 make it a poor choice for an undercover officer or a civilian – who needs something compact enough to carry comfortably and small enough to conceal in a suit pocket.

If you carry a light for self-protection – and you should – you need one that produces at least 60 lumens of light. SureFire believes that 60 lumens is a sound threshold for temporarily blinding a would-be assailant whose eyes are dark-adapted.

Most people, except for police, military and rescue personnel, have no urgent need of a light that produces more than 140 lumens. Note that many SureFire lights have more than one output level, depending on which lamp is installed.

For example, the Z2 CombatLight model – standard issue for the FBI and U.S. Air Marshals – ships from the factory with a P6O lamp assembly that produces 65 lumens for a runtime of 60 minutes. Installing the optional P61 lamp assembly in a Z2 increases the light output to a dazzling 120 lumens, but the runtime is reduced to 20 minutes.

SureFire makes two types of lights: those powered by disposable lithium batteries, and those that run with rechargeable battery packs. How you intend to use the light dictates whether you should select lithium or rechargeable. Lithium-powered flashlights are typically smaller and lighter than rechargeables.

This is why many police officers carry a lithium-powered light as a backup to their main rechargeable light. Because of their small size, lithium-powered lights are a good choice for camping and hiking, personal defense and daily carry. And their 10-year shelf life qualifies them as great backup lights in the event of a disaster.

READ: Flashlights solutions to help in the dark

SureFire rechargeable batteries can be recharged up to 1,000 times, never develop a memory and each rechargeable light includes an extra battery and a SmartCharge recharger. The downside is that, for a given light output, they are slightly heavier and larger than lithium-powered lights, require regular recharging, and necessitate a recharging device.

Rechargeable batteries self-discharge, so don’t think you can grab a rechargeable flashlight that was last charged four months ago and expect it to be fully juiced. Just like your cell phone, if you don’t keep it topped up with a fresh charge, it will slowly drain itself. This is the inherent nature of all ni-cad batteries.

SureFire designs lights to meet every variable and the variables are infinite. So maybe now would be a good time to just give you a few suggestions based on personal experience. Concealed Carry: The nod goes to the lightweight, compact, discreet E2E Executive Elite. Bright enough to blind a potential threat, yet small enough for purse or pocket, the E2E is the choice of many Secret Service agents.

You’ll never regret getting this one. Or two. I have three Executive Elites: one in my briefcase, one in my glove box and – most of the time one in my pocket. This light is also a favorite of commercial and military aviators, as it meets the FAA requirements for a mandatory aircrew light.

By replacing the Executive Elite’s MN03 standard lamp assembly with the optional MN02 lamp assembly, the E2e goes from 60 lumens of output for 75 minutes to a marathon 25 lumens for 2.5 hours of runtime. This makes the E2e Executive an ideal camp light. Rechargeable: The 8AX or 9AN Commander from the SureFire Advanced

The rechargeable series are my two favorites. I’ve kept an 8AX next to my bed for the last five years. I use it for everything from finding my shoes to investigating strange noises in the middle of the night. I swap freshly charged batteries regularly since SureFire supplies its rechargeables with two batteries for just this reason.

The 9AN is basically the same light with an added feature of two bulbs in one reflector so you can switch back and forth from 20 to 140 lumens depending on your need. Now you have enough information to go shopping. To truly appreciate a SureFire you really have to hold one in your hand and see the beam quality with your own eyes, which is why SureFire recommends that you visit your local SureFire authorized dealer for a hands-on demonstration.