How to Remove Rust From Tools Using Homemade Kitchen Liquids? 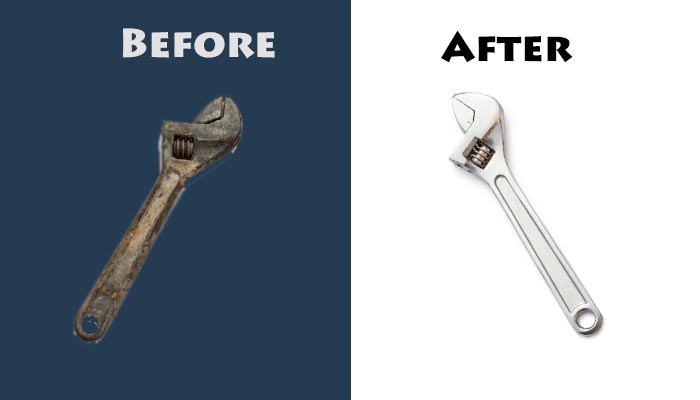 Imagine yourself ready to work on a project with some handy tools such as a hammer, screwdriver or saw, until you notice rust. Rust would eventually take its toll on any tools no matter how thorough you stored it.

Spending money on buying new tools would be deemed useless too since tools would eventually rust if not maintained properly. We have listed some natural remedies on how to remove rust from tools.

Homemade Kitchen Liquids and Other Household Items for Rust Removal

Before rushing to Home Depots to buy chemical rust remover and other chemical anti-rusts, you might want to check your house for some available liquids that can help you with your rust problems. Below are tips on how to remove rust from tools using some kitchen liquids.

1) Soap and Water. Some rust on tools can be due to the grease or other dirt that has accumulated due to frequent use. A little rust can be washed off by some strong detergent soap and water. It is also advisable to wash everything first with soap and water before removing rust with other household items.

2) Apple Cider Vinegar or White Vinegar. Unknown to some, vinegar is a very strong liquid that has an acidity level that can cook, kill germs or remove rust. Wash the tool with soap and water then soak it in the vinegar. Once done, put the tool through running water and see the rust come off. Depending on the severity of the rust, you might need to rub it off with sand paper.

3) Lemon and salt. Sprinkle salt to the rusty part, then squeeze the lemon on it, let is sit for a while then wash it with running water. Cannot be any easier!

4) Potato. Although it is not liquid, I might as well mention it because of its powerful rust removing property. A raw potato is rich in oxalic acid compound and a known component to remove rust or stain. Cut the raw potato in half and rub it on the rusted part until the rust disappears. This video will clear any doubt you have.

5) Ketchup. It can be used for rusty silverwares and coppers. Squeeze some ketchup on a toothbrush and brush it on any rusted silverwares or coppers and see the magic work. Rinse with water after. Find out more about other weird and wonderful uses of ketchup here. I’m actually amazed by this power of ketchup too!

READ: How to Buff a Car Like a Pro in Just 5 Easy Steps

6) Baking Soda. It has the most number of uses when it comes to kitchen household items. It doesn’t just remove rust but it also has 51 other uses. Mix baking soda with water to make a paste. Apply the paste on the rusted tool and let it sit for an hour. Wipe them off with a dry rag or brushed it off with any brush to completely remove the rust.

7) Soda. One of its ingredients is phosphoric acid which helps in removing rust or stains. Just soak any rusted tool in a soda and let it sit for an hour or so.

Why Should You Choose Kitchen Liquids Over Chemical Rust Remover?

Kitchen liquids are the perfect substitute for chemical rust remover because it has less harmful ingredients. Besides, you can save money by using household items since it’s readily available in your kitchen.  It can also save you time as well because you don’t need to go to the store to buy rust remover.

When all your tools have been restored and rust-free, keep and store them in a dry place. Moisture is the number one cause of rusting so keeping your tools in a safe dry place is a good way to avoid corrosion of tools. Another important tip is to paint your tools. Spray paint or painting it with a brush are both fine. Also, apply a top primer to make sure the paint will stick.

For a visual on how to remove rust from tools, you can check this sample video presentation. In the video, you will be taught an easy way to remove rust using an apple cider vinegar, a soda, decking cleaner, white vinegar, and molasses. The best thing about the video is, it compares all the chemicals and show the most effective rust remover.

Truly, removing rust from tools has never been this easy with these DIY tips and readily available kitchen liquids at home. No need to spend a lot on rust-removing and anti-corrosive chemicals. Save yourself money and a trip to Home Depots by restoring your tools to its mint condition by these homemade kitchen liquids.