The Different Types of Saws, Their Functions, and How They Are Used 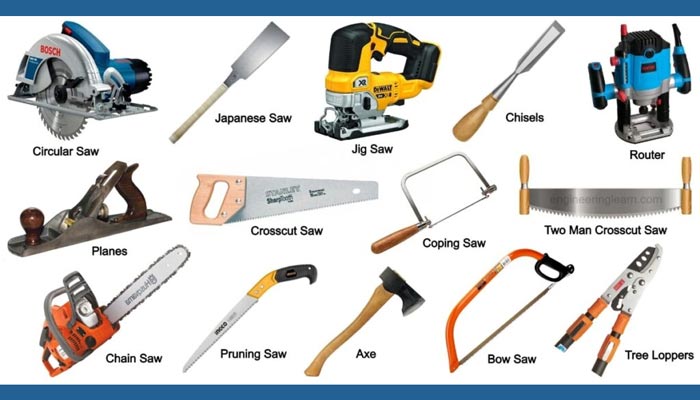 There are several types of saws that an average guy may not know about. It would be dangerous for someone to just use a tool capable of cutting their arm or head without prior knowledge about it.  Anyone who might need to use a power tool such as a saw should know the danger it entails.

Skilled or not on using power tools, it is still important to learn the functionality of each saw. So to prevent some unfortunate incidents such as losing your finger or just cutting yourself, here’s a brief description of what you need to know about the varieties of saws.

Saws Are Specialized for Different Purposes

You must be careful about choosing the right saw for cutting different materials like wood, metals, and plastics. Always remember that certain saws could not be used to cut metal because it is only intended for cutting woods. Or some wood saws can’t be used to cut certain types of wood.

A variety of saw blades is created to get the best result when cutting certain materials. Some saws are specialized in cutting plastics and laminates while some are for cutting melamine and non-ferrous metal.

There are combination blades that are used for making two types of cut and are designed to rip or crosscut. However, there are also blades for general purposes and could be used for cutting all sorts of materials such as melamine, plastics, plywood, etc.

What Are the Basic Types of Saws and its Uses?

The use of saws could be traced back thousands of years ago. These tools had been a helpful partner of humans for building and renovating their homes or making simple objects for recreation. Watch James Write to learn more about types of handsaw and their uses.

Basic Handsaw. The common purpose of this saw is for cutting different pieces of wood. This is to join the pieces of wood together or to carve the wood so that it would fit in its designated place. It is arguably the most reliable saw when cutting woods in your household like a 2×4 wood.

Backsaw: These are normally used for precise wood cutting such as joinery, mortise and tenons, dovetails, cabinetry, and dovetails. It has a stiffening rib for better control of the saw. However, this limits them in cutting deeper cuts. They usually have narrowly spaced teeth in their blades.

READ: Why Golf Rangefinders Are the Most Sought-After Tools for Modern Golfers?

Hacksaw: They usually have fine-toothed blades and are recognizable by the C-frame where the blade is attached. They are commonly used for cutting plastics and metals. It is a perfect tool in your household because it can cut pipes or tubing. Be careful though because it could gum up when cutting softer materials.

Japanese Saws: These saws are known for their thin blades and are used to cut dense woods. They have crosscut teeth at one side and rip teeth on the other. Start a guide path with the cross cut on the edge, then continue cutting by easily switching to the rip teeth to finish cutting.

Keyhole Saws: Known for their protruding blade with a round handle, keyhole saws are used to cut patterns or irregular circles. They can be very helpful in removing small sections of the drywall. There are two varieties of this saw: the retractable blade and fixed blade. Both of them are usually used in construction.

Pruning Saws: It is the type of saw that has a curved blade with a single pistol grip handle. Their coarse teeth that can cut in both directions are for removing material faster. It is usually used in the household but they could also come in handy in lawn services, landscapers and tree surgeons.

Rip-Cut Saw: These are perfect for framing purposes. They have widely spaced teeth for cutting woods. In woodworks, this tool is very important to have. Anyone that specializes in cutting woods usually has several types of rip cut saws with different lengths and purposes.

Wallboard Saw: Similar to keyhole saws, these particular types of saw are for puncturing drywall or paneling. They have a wider and shorter blade with fewer teeth. They are often made with double-edged blades and their function is mainly for creating starter holes before using powered tools.

Coping Saws: These are saws that can cut intricate designs such as patterns and shapes into the moldings or woods. If you want precise cutting in the wood without using powered tools, this could be an excellent choice. It has a hard blade that is attached to its C-frame up to its handle. Its thinness makes it easier to control your cutting within the wood.

Fret Saws: Fret saws are like coping saws that have a shorter and thinner blade. However, unlike coping saws, it has fixed orientation because of its frame making it harder to cut long and narrow components. They are for cutting tighter and more detailed scrollwork. The long deep frame allows it to cut further into the edge of the section.

Miter Saws: It is commonly known as large backsaw with 20-30 inches saw blades.  They come with a miter box that holds and guides the saw to allow cutting in an accurate 90-degree or 45-degree angles.

What Are the Mechanically Powered Types of Saws and its Uses?

The major source of power of these types of saws is electricity. They could either be connected to an electric socket, powered by a battery, or an internal combustion engine. These saws could be categorized into three major classifications: the continuous band saws, the reciprocating blade saws, and the circular blade saws.

The Continuous Band Saw: Continuous band saw uses a saw blade that consists of a band of metals with teeth riding on wheels that are continuously rotating on the outside edge.

Band Saw: It is mainly used in metalwork, woodworks, and lumbering. It can also cut a variety of materials such as plastics. If you want a uniform cutting, you can use this tool because it has evenly distributed tooth in its blade. It could also cut irregular shapes or curves in the wood like a jigsaw.

Chainsaw: This is a handheld saw that is run by combustion engines. It is commonly used for cutting trees, cutting brushwood, or any other activity that needs a portable powered cutting tool. It has a cutting chain with sharp teeth on each section of the chain.

The Reciprocating Blade Saws: This is a mechanical saw with a blade that moves back and forth to cut objects. They could either be attached to a fixed platform or controlled by an operator by holding it.

Reciprocating Saw: Its blade is larger than the jigsaws. Its variations depend on speed, power, and other features. Modern reciprocating saws have a dial or are trigger-sensitive that controls the speed of the blade. Another important feature of this saw is the inclusion of an orbital action causing the tip of the blade to form an oval pattern.

Scroll Saws: It has a very thin blade between the arm and platform. It is a popular tool for artists that deal with forming intricate design since its capable of cutting curves and irregular shapes. It can be more versatile than the jigsaw or coping saw.

Jigsaws: This type of saw uses a reciprocating blade in cutting custom curves in metals, woods, and other materials. These are powered by electricity and needs significant control by the user. Be cautious when using this saw as it could easily drift if you don’t handle it carefully.

Circular Blade Saws: These are any mechanical cutting tools that have a rotating blade. They could either be in the table (table mounted or built-in) or handheld.

Circular Saws: These are commonly used for sawing logs and beams in sawmills. It has an abrasive or toothed blade or disc to cut materials by pushing it into the spinning blade.

Table Saws: It is also known as a sawbench that has a circular blade attached to a rotating shaft powered by an electric motor. Conveniently use a guide for better precision in cutting.

Radial Arm Saw: A circular blade is mounted on a sliding horizontal arm. This allows the saw to be pulled downward across the object to cut it. It is useful in cutting long pieces of wood or metal.

With proper care and knowledge about the tools you are using, you can prevent future accidents from happening. You can watch or read pointers about safety precautions from Canadian Center for Occupational Health and Safety. We hope you learn a thing or two about the different types of saws and its functions.